LIVELIHOODS HANGING BY A THREAD

A Survey of Garment Workers and Firms in Yangon, Myanmar

The impact of the military takeover on garment workers used a telephone survey of 1,600 current and former garment sector workers (1,200 female and 400 male). The sampling frame was a list of garment sector workers that have received Myan Ku social assistance, provided by the European Union’s representative office in Myanmar. Data collection took place between 11-27 March 2022.

The impact of the military takeover on garment firms was assessed through a qualitative data gathering exercise. An open-ended questionnaire was administered to 55 firms, 45 of which were garment sector firms. The rest of the firms were interviewed to assess the impact of the military takeover on sectors revolving around the garment industry. As in the garment workers survey, most of the interviewed firms are based in Yangon and the surrounding areas. To account for any spill-over effects of the ongoing crisis on other regions, firms from other states and regions were also included in the sample.

The purpose of this survey-based study was to hear directly both from the workers as well as firm owners on how the recent disturbances are affecting their livelihoods and businesses, respectively. The survey focuses mainly on understanding the challenges to firm owners in continuing operations, the difficulties encountered by workers who are either laid off or forced to move to another occupation, and the perceptions of both these groups on the outlook for the sector.

We find significant negative impacts of the crises on workers’ lives. The recent World Bank economic monitor and business surveys indicate that the sector may have started recovering slowly, but this may be stalled in case the trade sanctions imposed on Myanmar are widened and deepened. Workers’ livelihoods, already squeezed by the effect of Covid-19, can further deteriorate, with potential

intergenerational consequences, thus making the effects of the ongoing crisis long lasting. Similarly, a report by ILO (2022) indicates significant reduction in both working hours and employment, particularly among women. Threatened by sanctions and internal policy chaos and coupled with banking and supply chain disruptions, the sector could see significant reduction in the incomes of its workers,
leading to increases in poverty rates and vulnerability. The task at hand seems how to ensure that the sector continues to play its lead role in employment generation, poverty reduction and exports while adhering to the required labour standards and responsible business practices. 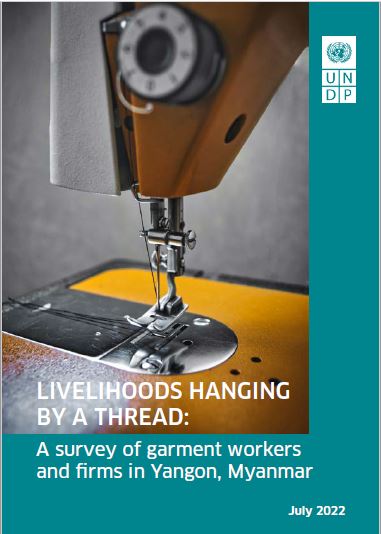 Livelihoods Hanging By A Thread

A Survey of Garment Workers and Firms in Yangon, Myanmar